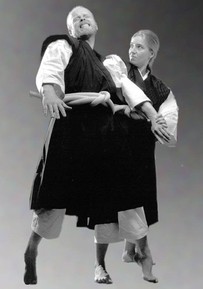 Kat began studying Shorinji Kempo at GUSKC in 2005 when she began her masters degree. She originally trained under the instruction of Sensei Tony Leith (4th dan). Having realised the physical and mental benefits that she gained from studying the martial art, she continued training and then instructing throughout her PhD.

Kat frequently visits and trains in other British Shorinji Kempo Federation (BSKF) and International Kempo Association (IKA) dojo world over. She trains under the instruction of the BSKF's and the IKA's Chief Instructor, Mizuno Sensei (8th dan), whenever she can.

Kat opened The Glasgow Kempo Club in the beginning of 2015 to the public.

Kat attended the inaugural IKA seminar in Japan in 2016.

Kat has been a director for the BSKF since 2014.

A Word from our Branch Master

"I began Shorinji Kempo as I was wanting to try something new. Shorinji Kempo appealed to me due to how effective and applicable the techniques are. The philosophy side of the martial art also reflects the way I believe that a person should live their life.

Since I began the martial art, I have made many good friends and continue to do so.

I have seen how Shorinji Kempo can change and empower people for the better.

I firmly believe in the activity and art. Aside from gaining valuable skills in self-defence and the physical and health benefits that can be achieved, I have seen how the activity can build communities, improve people; promote leaders, build confidence and develop individuals.

I wanted to improve the community and allow everyone to have access to the teachings of Shorinji Kempo.

I opened Glasgow Kempo dojo to share the knowledge and experience".