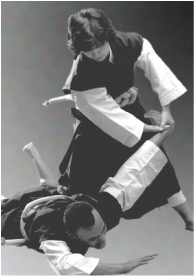 The Glasgow Kempo club is associated with the British Shorinji Kempo Federation (BSKF) and the International Kempo Association (IKA) and is for everyone; regardless of age, gender, experience and levels of physical fitness.

The BSKF was the original organisation that founded Shorinji Kempo in the UK in 1974, and exists to promote a Healthy Body, Healthy Mind and Self Defence.

Shorinji Kempo incorporates effective self defence techniques with practical Kongo Zen philosophy. The training aims to develop the potential of the individual and create balanced people, both mentally and physically. Its intentions are to instill a student with the confidence needed to stand up for their ideals and the ability to defend their position. In this way they can help others and benefit society as a whole.

The self defence techniques incorporate both hard and soft techniques: 'Goho' and 'Juho'. Goho is the hard system, comprising of punches, kicks, dodges and blocks. Juho is the soft system, used when grabbed or held against one's will. They comprise releasing or throwing the opponent and applying locks to subdue them. The two systems are used hand in hand to create a unique all round system of self defence based on technique rather than strength, capable of repelling any form of attack.

The teachings also include 'Seiho' and Zazen meditation. Seiho is a therapeutic accupressure massage system used to relax muscles, relieve tension and regulate circulation. Zazen meditation is practiced during every class to calm the mind and encourage breathing control.